The Brad – Deva railway (with the first station at the Girl’s Hill).

The building of the line started during the Second World War, in 1940, using Jews, then Russian prisoners of war. The construction faced the specialists with many technical problems, and in 1946 the construction site was abandoned. The work recommenced in 1979 and completed 8 years later. On the 11th of December 1979 the first passenger train departed the Deva railway station towards Brad. Sadly, 10 years later, the line was closed and removed from the field. The official reason was the unstable soil in various locations on the route. The viaducts, as well as the tunnels have remained, and they dot the landscape, giving it a “retro” look, full of nostalgia and interesting stories. 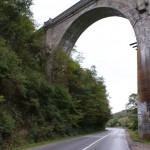 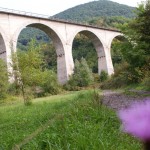 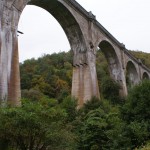 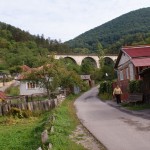 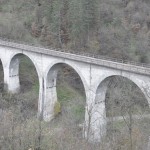 The story of the Soviet Soldiers’ Monument. It is located on the ridge of a hill near the village, where Soviet prisoners of war who died in the Luncoiu de Jos concentration camp were buried in a mass grave. They were actually the prisoners that continued to work on the construction of the Deva-Brad railway line during the Antonescu regime. The monument was erected in the 1960s by the authorities of the time. Two inscriptions are on the sides of the monument “here were buried the Soviet soldiers who were foully killed during the Antonescu dictatorship. (1941-1943)” and “eternal glory to the Soviet heroes who gave their lives to free our country”. These are only half-told truths, as the communist authorities could not recognize the forced labor camps for the Soviet prisoners, and the latter Romanian-Soviet friendship was in contradiction to the atrocities committed against the Soviet prisoners in the concentration camps. Moreover, this memorial was used year after year as a landmark for the pupils that were joining the ranks of the Pioneers and “utecisti”. As previously mentioned, the monument only marks the site of the mass grave, because according to the older people from the area, shortly after the memorial was built, a delegation of the Red Army came, searched for the remains of the prisoners and transferred them back in the Soviet Union. 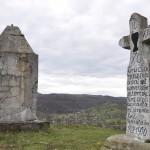 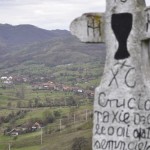 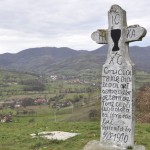