Dealul Fetii (The Girl’s Hill). With its peak, at an altitude of 697m, the hill is the highest point on the territory of the commune. This hill is surrounded by a legend. A poor young man fell in love with a rich girl. The boy, as was the custom of the place, asked the parents for the girl’s hand, but they disapproved the marriage. Nonetheless, seeing the strong love between the boy and the girl, the girl’s father changed his mind and tells the boy that he would agree to him marrying his daughter if he would take her on his back to the top of the hill. The boy immediately said yes and agreed to the father’s challenge, but the effort to climb up the hill overwhelmed him and he loses his life. In her grieve, the girl throws herself over the ridge of the hill and died. Legend says that on the place where she died a stream appeared, Paraul Cernelelor, which flows to this day on the Girl’s Hill. The legend of this trial could be reedited in the present day by organizing a completion for men to climb up the hill with girls on their backs.
This hill is also the entrance to an abandoned mine and many kilometers of mine shafts that connect it to the Barza-Brad gold mines.
If you know where to look, you can still spot the numbers 1, 9, 3 and 2, namely 1932 that represents the year when the area was reforested. Forest rangers wanted to mark this occasion by planting fir trees in the middle of a beech tree forest. 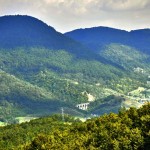 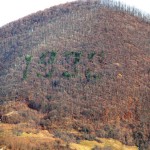 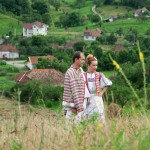 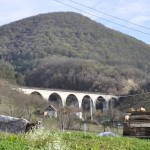 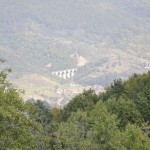